We would like to welcome the Aircraft Owners and Pilots Association (AOPA) our newest SendMyAd and Virtual Publisher client.

AOPA is the beacon for those who cherish the freedom to fly. It demonstrates what is possible when a determined organization listens to its members, collaborates with its colleagues, finds solutions with its partners in government, and focuses its resources—all to secure the future of General Aviation. AOPA’s success is proof that the public good can be served while individual freedoms are preserved. 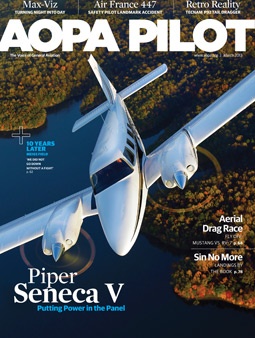 History of AOPA
The Aircraft Owners and Pilots Association, a not-for-profit organization dedicated to general aviation, was incorporated on May 15, 1939.

From the start, AOPA has fought to protect the freedom to fly while keeping general aviation safe, fun, and affordable. Growth in the early years was slow, but by 2010 more than 400,000 individuals were AOPA members.

Today’s robust and growing AOPA is a far cry from the earliest years. As part of a deal struck with Ziff-Davis Publishing Company even before incorporation, AOPA would have a special section in each month’s Popular Aviation, the predecessor of Flying magazine, to communicate with its members. Ziff-Davis drove a hard bargain, however, with a clause that threatened cancellation of the deal if AOPA membership didn’t reach 2,500 in the first year.

The debate over what to call the not-yet-incorporated group raged on, well into the night. Finally, founder C. Townsend Ludington yawned — by this time it was about 2:30 in the morning — and announced, “Gentlemen, I am tired, so I’m going to bed. I propose we name it just what it is — the Aircraft Owners and Pilots Association.” There was unanimous approval.

Read more about the AOPA and please consider supporting their organization.