When Prinovis was formed, the company’s prepress process was like a patchwork quilt, with each facility having its own system, explains Roger Schwarz, Chief Information Officer, Prinovis. “The imperative was to find the “one innovative, modern system that will give us a standardized environment, letting us centralize prepress and IT support for the company,” notes Schwarz. “We were using TWIST, as well as other systems, modules, and our own written programs. We want to reduce the number of components we use, reduce the number of providers we deal with and thus, reduce costs.”

A plan for prepress 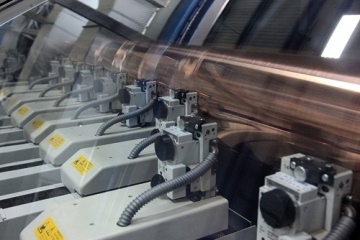 The prepress plan is to use Hell Gravure Systems’ software to drive engravings for the gravure cylinders and DALIM SOFTWARE’s TWIST Engine and ES for everything else. Prinovis is looking to upgrade its older version of TWIST to the newer ES TWIST, and extend its use of the system – which will continue to initiate jobs internally out of the workflow, converting customers’ data into the TIFF file format used to engrave gravure cylinders – with ES, allowing color-accurate virtual and remote soft proofing and real-time collaborative project management via a standard web browser. ES and TWIST combine to bring sophisticated and fast approval cycles to a fully automated prepress process.

At press time, Prinovis was about to go live in Dresden with the ES/TWIST Engine server. The plan is then to go live in Itzehoe within two months, and then onto to Liverpool and Nuremberg. “Our target is to implement a consistent, centralized prepress system based on ES TWIST 3,” says Schwarz. “The Dresden workflow will be our role model of the system we want to implement company- wide—a system that is standard, harmonized, and centralized.”

Prinovis is using ES and the DIALOGUE Engine in magazine approval cycles. Although ES TWIST system is not yet in full production, Schwarz is seeing productivity improvements already.

“Our file processing is about 20-30% faster, but it is the amount of resources we’re expending for the same production volume that is important,” says Schwarz. “The amount of full-time employees needed in the prepress environment has already decreased dramatically — about three-to-four per site. It is essential that we are able to build a well-automated system with fully configurable customer job structures and the ability to easily view job status. Only with this system, utilizing TWIST Engine and ES, have we been able to free up a good amount of manpower for other prepress tasks within our plants.”

One of the goals is to use ES to drive the use of soft proofs for color adjustment of our presses instead of hard copy proofs. So, customers won’t have to pay for the more expensive hard copies and they can approve the pages directly in the Prinovis system. Prinovis can use this exact data for engraving, printing and color corrections. “We are hoping that our customers will give us an approval with the soft proof—a ‘certification’ to go ahead; that the feeling is ‘if you adjust the press to the ES soft proof, we certify that you can continue without further approval or notice,’” says Schwarz. “For us, that is a big benefit in the consumption of time and eliminating costs during the production process. Especially with periodicals, that time-savings is important.”

Prinovis is already finding targets where our new DALIM SOFTWARE system will be of considerable assistance. “There is a high demand for exceptionally accurate, true-life colors in advertising for fashion magazines,” comments Schwarz. “Two publishers, Bauer (10 magazines per year) and Klingel (79 magazines per year) require two million copies per issue. Given the number of hard copy proofs we created for all of these issues, we see softproofs reducing costs.”

“We also produce all issues from the publishing house Wort und Bild,” adds Schwarz. “With our remote softproofing and online approval system, producing 64 issues comprising of 170 million since last spring, we have been able to eliminate our need for press proofs.

For Schwarz, who comes from the banking industry, the experience of trying to harmonize a workflow that was so disparate has been unlike anything he had envisioned. Working directly with DALIM SOFTWARE was one of the high points. “They were very responsive, and they’re very open to new and different ideas without losing sight of the need to produce a product,” he says.

When Schwarz began working at Prinovis a little over a year ago, he was given the mandate to not “do anything but finish the project—and we did it!” he asserts. “When we started there were some target goals for efficiency, which we’ve surpassed—that is why we are taking it to the other sites.”